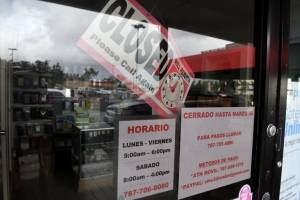 The mayor of Camuy, Gabriel Hernandez Rodriguez, announced today, Saturday, a citizens’ initiative to reward people who denounce those who litter in public places.

According to the press release, the program “If Camuy gets dirty, throw him in the middle“It will give the whistleblower $ 50 if he submits evidence that captures one or more people throwing debris, garbage, junk, used tires, among others, in public places.

“The applicable fine will be $ 250.00, of which $ 50 will go to the citizen who filed the complaint, the other $ 150 will go to the Department of Public Works for the area of ​​maintenance of the public roads of our town in order to continue maintaining Camuy Limpio y Bello and the remaining $ 50 for the Municipal Public Order Code Office for promotion and orientation about the program, ”said the mayor in written statements.