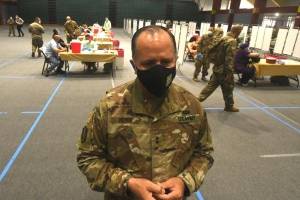 Charges against a man in the Maricao neighborhood of Vega Alta who struck his mother in the face and fractured a cheekbone were filed this Tuesday against the aggressor, police reported.

According to the Uniformed investigation, David Pantojas Morales, 34, a resident of Vega Baja, demanded $ 100 from his mother and when she refused to give him the money, he pushed her against a wooden door of the residence.

The woman was transported by ambulance to the CDT of Vega Alta, where she was diagnosed with a fracture in the area of ​​the left cheekbone.

Pantoja Morales was arrested and taken to the Bayamón court, where he was charged with criminal charges for assault against an elderly person (art.127-A) and serious assault (art.195 A).

Judge Milagros Muñiz of the Bayamón Court determined the cause of the crimes, indicating a bond of 20 thousand dollars, which Pantoja Morales did not pay, for which he was admitted to the Bayamón Correctional Complex.

Board agrees that the governor, mayors and Legislature identify $ 44 million for Equalization Fund

Charges filed against man for escalation of residence in Ponce