Steven Kupka and Luis Bacó are lobbyists for donors related to the resident commissioner with privileged access to the official designated by the White House to be the liaison with Puerto Rico. 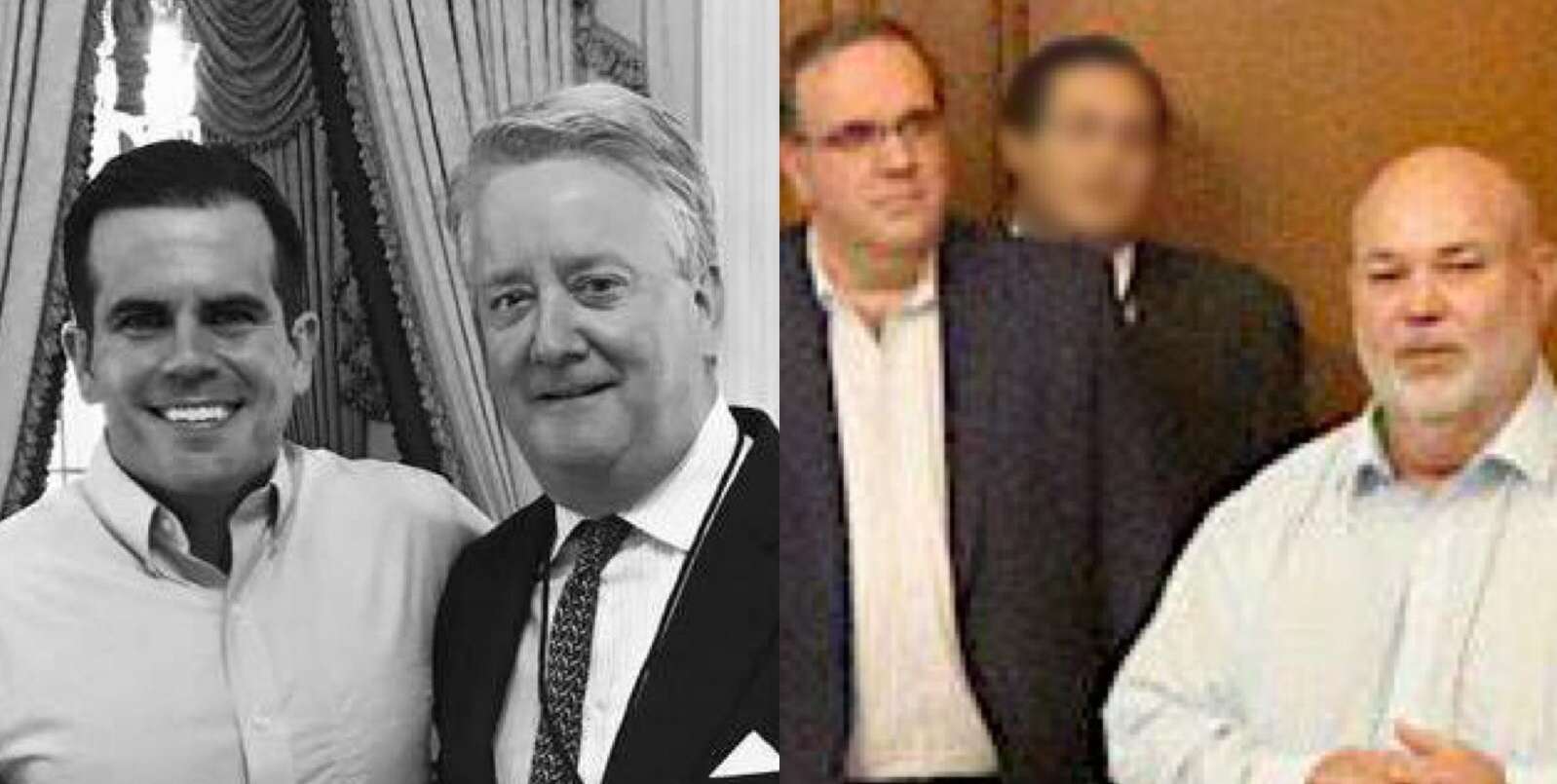 Former Governor Ricardo Rosselló Nevares poses in a 2018 photo in La Fortaleza with lobbyist Steve Kupka and lobbyist Luis Bacó appears next to the president of the House, Carlos Méndez Núñez, in a meeting in the office of the president on Capitol Hill in a 2019 photo.

Photo: Photocapture on Facebook and Twitter [19659004] Rear Admiral Peter J. Brown, coordinator for the recovery of Puerto Rico after Hurricanes Irma and Maria, is executing his most active day on the Island this week with a series of meetings that reveal a broader scope of action than just the work. of reconstruction and in which the actors of the private sector that participate are mainly lobbyists and donors related to the Resident Commissioner, Jenniffer González Colón. [19659005] The work agenda, to which NotiCel had access, attracts attention because it denotes that a series of public policy meetings have been coordinated by the White House in which direct access has been given to lobbyists. Special Representative of the President for Disaster Recovery in Puerto Rico is the official title of Brown whose role has also been presented as that of "coordinator of federal funds" for the Island and who is one, that of highest rank, of the multiple observers and monitors that the Government of the United States has placed in different instances of the Government of Puerto Rico. At some of the meetings is also Robert M. Couch, financial monitor for the federal Department of Housing for the reconstruction funds channeled into that agency.

During his stay this week, Brown's assistant is Juan Andrés Caro, who serves in the White House as a public policy adviser for the Federal Department of Energy (DOE). And it is Steve Kupka, a lobbyist with a long history in the Republican Party and who is involved with the privatization of the Electric Power Authority (PREPA) through the firm King & Spalding (KS), one of which has access to the meetings , according to the final version of the work agenda. 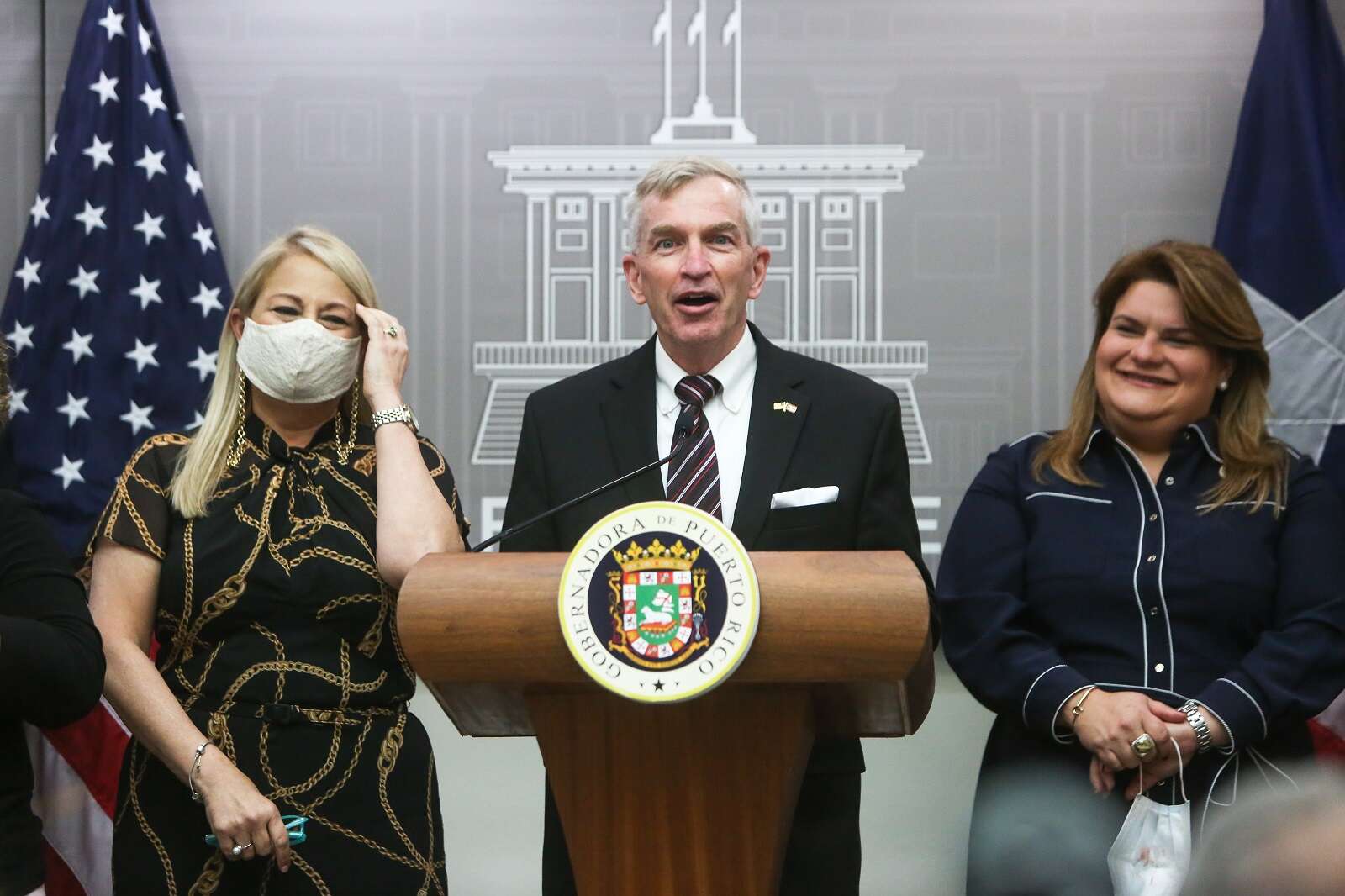 Photo: Nahira Montcourt [19659004] The other is Luis Bacó, currently affiliated with the Capitol Hill Consulting Group (CHCG) lobbying group, but with a long history in the Resident Police Station Office that began in the 1990s, when the position was held by former Governor Carlos Romero Barceló, and that included being González Colón's chief of staff as well as capital partner of the office of the McConnell Valdés law firm in the federal capital. In fact, Bacó's wife, Milagros Gavilán Pérez, currently works with the Resident Commissioner as a consultant. Bacó flirted with the idea of ​​launching himself as a candidate for the police station in 2015, an administration attended by his relative, the current secretary of the Interior, Antonio Pabón Batlle.

Caro, Kupka and Bacó did not answer calls for comment on these facts.

The President of the Chamber, Carlos Méndez Núñez receives Steve Kupka (center), Luis Bacó and James P. O'Dobrinak from MCS (left) of the Young President's Organization (YPO) group " who came to the Island to learn about investment and development opportunities in Puerto Rico. "

King & Spalding is the largest donor that González Colón currently has with $ 14,232 donated in the last year to the Political Action Committee (PAC) All with Jenniffer Inc. channeled through King & Spalding Nonpartisan Committee for Good Government and individuals associated with the firm. Among these, $ 2,432.20 donated directly by Kupka.

Although his name recently came to light due to his involvement with PREPA, Kupka knew the Island at least 20 years ago, when he worked with the former governor, I passed away, Luis A. Ferré, former chamber president Edison Misla Aldarondo, and developer César Cabrera in former Republican president George W. Bush's local campaign.

In KS, Kupka founded the “Puerto Rico Working Group,” with which the firm markets its access to different agencies of the Government of Puerto Rico in a combination that is striking. On the one hand, as lobbyists of PREPA's executive team and its Board of Directors, on the other hand, as main legal advisors of the privatization process of that public corporation and, also, as legal advisers of the transactions of the Authority for Alliances. Public Private.

"Clearly, there will be many opportunities for King & Spalding's clients to participate in the reconstruction of Puerto Rico's electricity grid, in natural gas projects and in other renewable energy needs of PREPA," he said. Kupka in a communication to customers in July 2018. NotiCel had already reported that the company to which PREPA awarded the contract for the supply of natural gas and conversion of units 5 and 6 of the San Juan Power Plant, New Fortress Energía, has a former KS lawyer, Brittain Rogers, at the head.

In his social networks, Kupka appears in a photo with former Governor Ricardo Rosselló Nevares in La Forta leza on April 5, 2018, in which he links lobbyist Elías Sánchez Sifonte, former campaign manager of Rosselló Nevares who, at that date, no longer held public office in the government.

The portion of the Telegram chat that NotiCel initially published last summer, and which ended up causing the resignation of Rosselló Nevares, evidence, however, that Sánchez Sifonte remained constantly connected to the now ex-governor and other officials and specifically goes out communicating and influencing official actions in energy projects. [19659020] Former Governor Ricardo Rosselló Nevares and lobbyist Steve Kupka, of King & Spalding, in a photo of Kupka that labels lobbyist Elías Sánchez Sifonte.

Since 2018, the KS contracts with Puerto Rico they total $ 19 million and, as of today, they have agreements in force with PREPA and the Debt Recovery Authority of the Government Bank of Fo

KS was in charge of reviewing renewable energy generation contracts that PREPA had stopped . The public corporation announced the new agreements, which have been criticized by the Fiscal Control Board (JCF), last May 20, among which is that of Montalva Solar Farm (on the grounds of Guánica and Lajas) which is in charge of Greenbriar Capital Corp., one of Bacó's clients .

According to publications by the Center for Investigative Journalism (CPI) Kupka has served to open doors in the federal Department of Agriculture for the president of the JCF, José Carrión III and is also a donor of Eduardo Bhatia, senator and pre-candidate for the governorship of the Popular Democratic Party, as well as Miguel Romero, senator and pre-candidate for mayor of San Juan for the New Progressive Party.

The official intervention of Kupka and Bacó is scheduled to take place today, in a “working lunch” to talk about the health industry on the Island. activity nor a meeting poster Prior to the Puerto Rico Chapter of the Association of General Contractors of America, they were in the press release with which Commissioner González Colón announced Brown's visit and official activities. In addition to public officials from the state and federal governments, the lunch includes Kupka, Bacó, Francisco Rodríguez Castro (president of Birling Capital, a financial consulting group that is working with the Island's hospitals), the executive director of the Hospital Association, Jaime Plá, the president of the health insurer MCS Healthcare Holdings LLC, James P. O'Dobrinak, and the president of MCS Advantage and MCS Life Insurance, Roberto Pando.

MCS is a client of Bacó through Capitol Hill and also KS. In addition, MCS is the only insurer or private component of the healthcare industry scheduled to participate in the meeting, other than hospitals.

Election donation records indicate O'Dobrinak donated $ 1,500 last March to All with Jenniffer Inc., while Pando has accumulated $ 3,000 in donations to the committee in the last two years, the most recent being on March 13. Meanwhile, MCS has donations totaling $ 3,100. 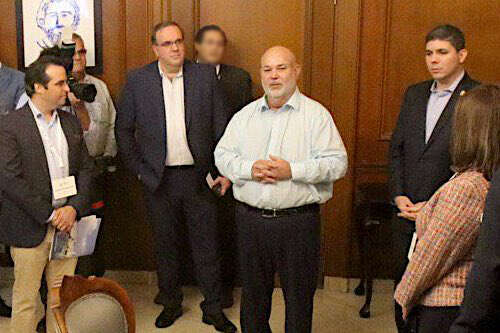 Lobbyist Luis Bacó, of Capitol Hill Consulting Group, in a 2019 photo behind the president of the House of Representatives, Carlos J. Méndez Núñez. (Twitter)

Both MCS and its counterparts, MMM, Triple-S, and First Medical, oppose releasing their patient and treatment information to the Electronic Health Information Exchange Corporation of Puerto Rico (PRHIN, for its acronym in English) according to the College of Physicians. It is assumed that for six years, and after $ 7.7 million invested in federal funds, the PRHIN was operating so that in Puerto Rico there was a first-rate digital system with which the authorities could plan public health programs and policies, reported the CPI.

Similarly, NotiCel has reviewed how the Hospital Association has not been accountable to the public about the information they have on how the treatment of coronavirus patients was able to load the resources of its members.

Another major donor to the Resident Commissioner, the pharmacist Amgen Inc. ($ 6,000 in the past year), also figured on Brown's agenda with a visit to her Juncos plant yesterday and a meeting on this industry in which Proposals circulating in the federal capital for Puerto Rico to have a preferential tax treatment that would attract pharmaceutical companies to the territory in a plan with intentions would have been discussed. s of "national security" so that this production is not concentrated in countries like China.

In these meetings, Amgen lobbyist, Roberto Monserrate, would have access, as well as industry interest groups such as the Manufacturers Association and the Puerto Rico Pharmaceutical Industry Association. Monitor Couch was also scheduled to participate.

Before leaving Puerto Rico tomorrow, and in addition to meetings today with the insurer and builders, Brown has scheduled meetings with the JCF and the US attorney for the District of Puerto Rico, W. Stephen Muldrow.

Agricultural entrepreneurs are urged to apply for federal incentives

Pedro Pierluisi reacts to the murder of a woman in Isabela