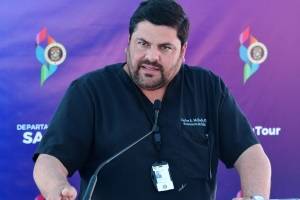 Jerome garffer, former contractor and former vice president of the Governing Board of the Electric Power Authority (PREPA) must remain in prison until the next June, 15 for violating the terms of his parole.

According to the press office of the Administration of Courts, the judge decided today Rafael Taboas of the Court of First Instance of San Juan, who determined that Garffer will be in jail until the celebration of the preview the next June 15 in which he faces charges for gender violence.

Garffer was arrested in the early hours of last Friday after violating a protection order against him that prohibits him from contacting the victim. At that time, a bond of $ 250,000 was imposed on him, which he loaned 10%.

However, on Friday afternoon, the Pretrial Services Program (PSAJ) requested the revocation of the bond and electronic supervision by failing to comply with the conditions imposed in the case of gender violence that is attended in court. de San Juan.

Draws for the day of the Electronic Lottery of June 14, 2021

They seek to plant 5,000 trees in different towns on the island to rescue the environment