ISLAND RADIO In collaboration with the firm, Consultoría Académica e Investigación Social, LLC., and the scientific pollsters, Dr. Jorge Bénitez Nazario and René Arrillaga, conducted their survey to identify the status of the political forces fourteen days before the November 2020 elections.

In this, the recognition of the candidates for the posts of resident commissioner and governor, as well as the preferences regarding the plebiscite consultation, were auscultated. In addition, demographic and geographic elements associated with the support for the different candidacies were identified.

The telephone survey was conducted among adults 18 years of age and older residing in Puerto Rico and registered to vote in November, between the October 12-17, 2020 using random scientific sampling where they were selected 5,000 phone numbers randomized among the electoral lists of active voters, geographically distributed in the North, South, East, West and Metro zone regions.

A total of 676 interviews were actually completed. The percentage of interviews carried out is good according to what is established in the literature on the subject when the selected strategy of telephone survey is used (18% effective). The sampling error margin was 3.16%, with a confidence level of 90%.

The human profile of the sample is essential to be able to make generalizations regarding the results of the study. For this, the sample must be similar to the universe of the San Juan people. Therefore, the geographical region, gender, age category, educational level and residential situation of the participants were evaluated.

In terms of the geographic regions that make up the electoral map of Puerto Rico, the interviewees were distributed proportionally. They were identified 676 subjects in each sector, East, West, North, South (including towns of the mountain range in the north, south and west) and Metro Area.

Regarding gender, the participants were distributed in a way very similar to the electoral demographic map of Puerto Rico; 52% feminine and 48% male. 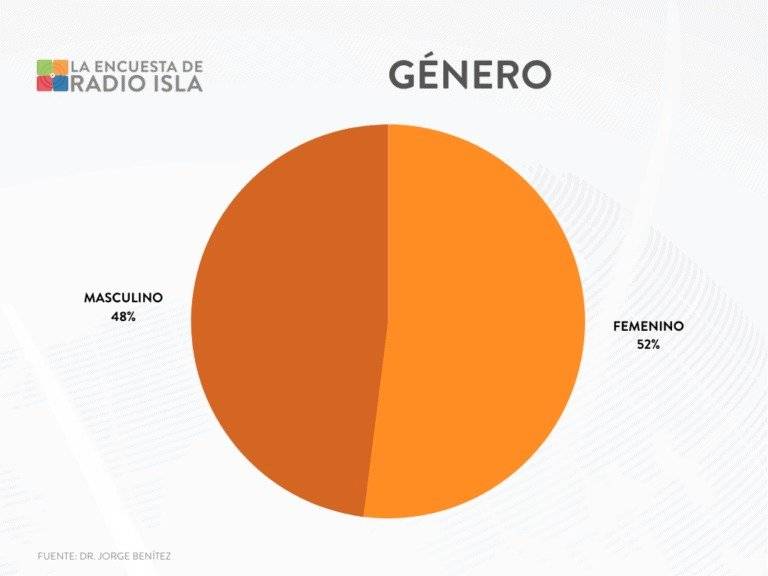 With respect to the ages of the interviewees, a distribution was obtained consistent with the island’s demography and with the official data of the people registered in the State Elections Commission (CEE). The sample presented a profile where people over 61 years of age predominated. However, the average age of the sample was 53.5 years, while the average age of the electoral population of Puerto Rico registered to vote is 52 years old. 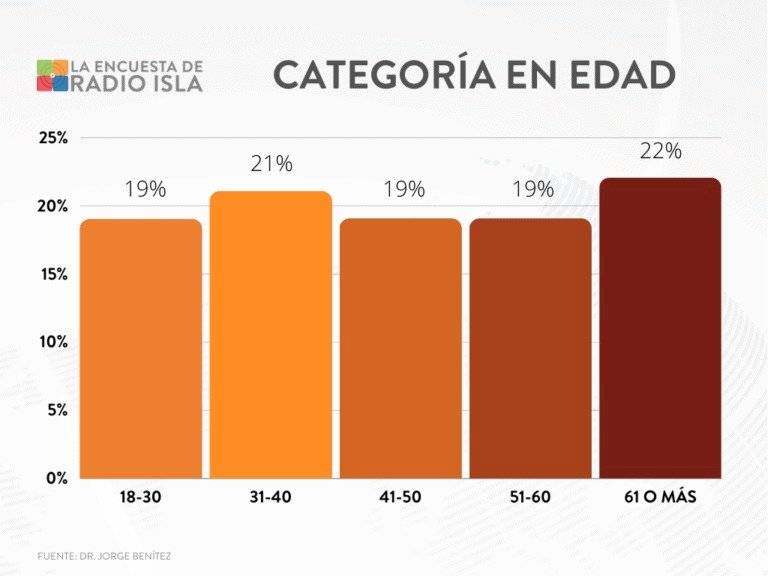 On the other hand, the 52% of the surveyed population reported having a high school and postgraduate diploma, which is very close to the average for the country reported by the last Census, in almost 49%. 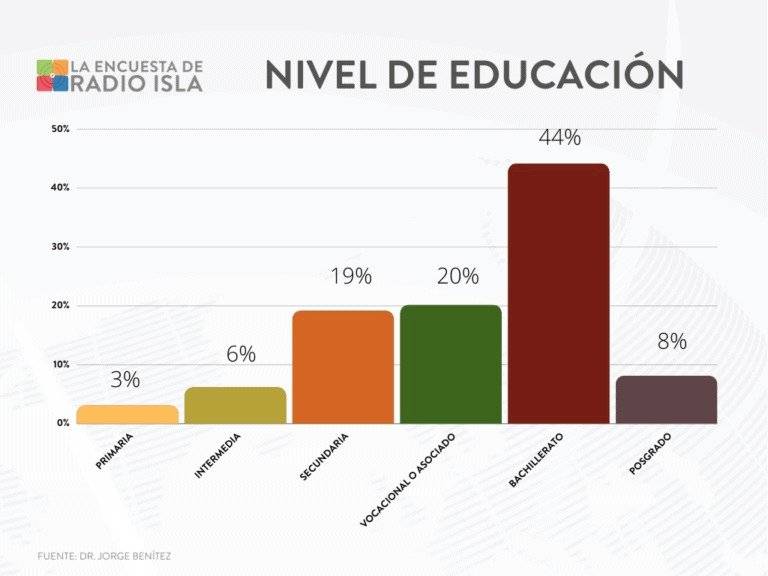 On the part of the residential situation of the participants in this study, the 44% of the interviewees indicated not having their own house. However, a 39% of the subjects live in rented residences. While a 17% live in public housing or with plan 8.

To the participants of the survey ISLAND RADIO He was presented with two contextual situations that influence the public predisposition to want a change with respect to the current administration of Puerto Rico.

First, information on the country’s problems validated by our previous surveys during the last three months was presented to serve as a context for the opinions obtained. 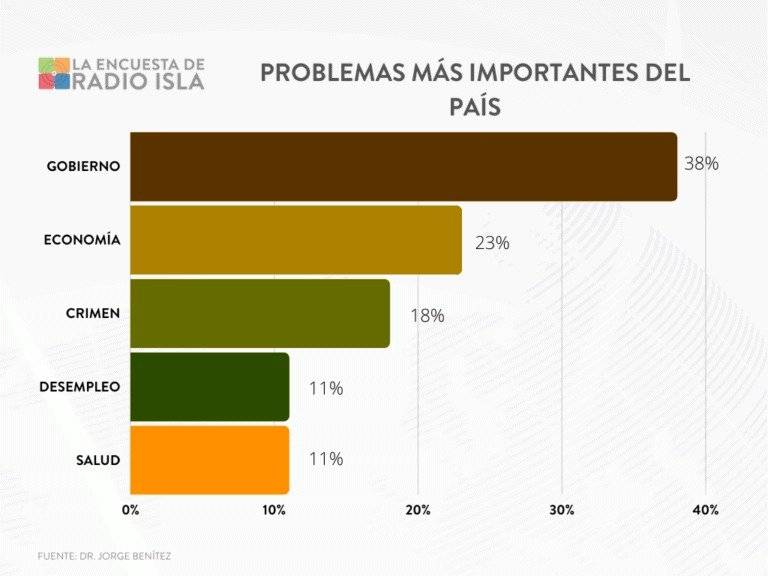 For the first time in 30 years of surveys, men, women and all age groups highlighted that the government It was the main problem about the economic situation at the country or personal level.

Interestingly, the concern among people over 45 years (majority of voters) about access to health services Y the abandonment of village centers and community recreation. In their comments, many of these parents and grandparents linked the identified problems to concerns that their children and grandchildren would not engage in healthy activities in their free time and that they would drop out of school or migrate to the United States.

Consequently, a general question was asked regarding how potential voters feel about the government of 4 years ago. He 66% of people claimed to feel worse. This result indicates that the majority of the electorate wants a change in the country’s political administration. 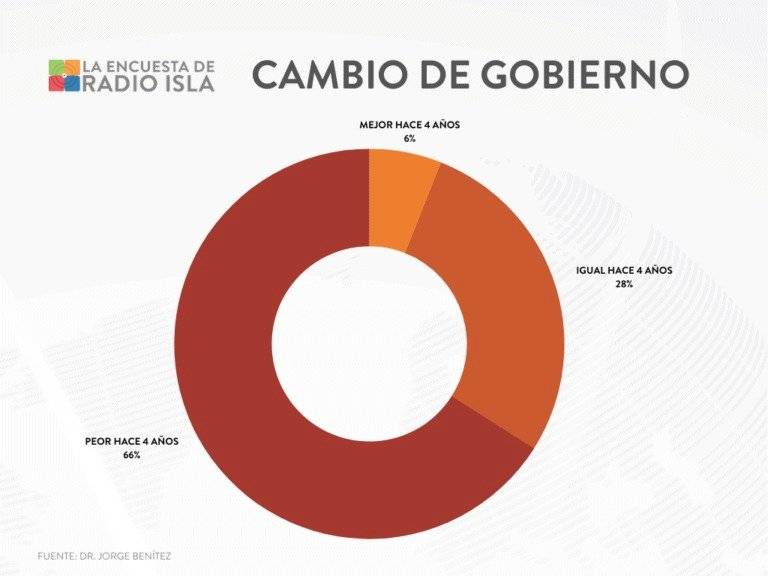 The third contextual element is that the 64% of the people interviewed claimed to be religious people. This issue is only significantly reduced among people between 18 and 30 years of age, where a 43%.

In short, these three contextual elements are closely linked to electoral preferences that we will see below, including the desirability of political change.

Citizens from all over Puerto Rico were questioned about their partisan political leanings at the national level, the plebiscite in the November elections.

Regarding party identification, the responses obtained indicate that in San Juan, the majority of voters identify with the New Progressive Party (PNP) with a linkage of 35%, Meanwhile he Popular Democratic Party (PPD) is supported by 31% of the participants. On the other hand, the eleven% of respondents are linked to the Citizen Victory Movement (MVC), the 8% with the Puerto Rican Independence Party (PIP), two% with Dignity Project and the 13% with none. 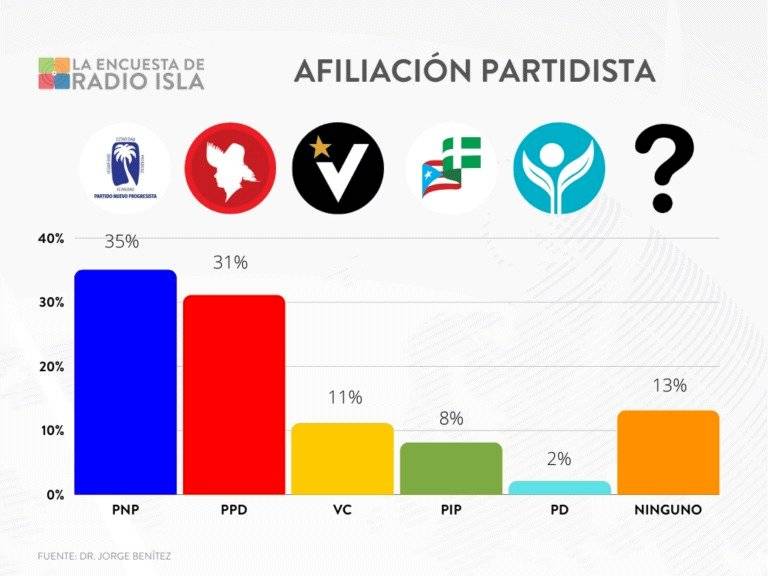 When is it really the day that you will have no shade? | Present

The little train that fills the children of Loíza with happiness

Auditions for choirs and new groups in Camerata Señorial