Multiple signs were hung tonight on bridges located on busy highways in the metropolitan area in a demonstration for minors who are missing on the island.

Two of them were located on the bridge located just before the Medical Center and another at the height of Plaza Las Américas on the express.

The protest is led by the executive chef of the Comedor de la Kennedy initiative, Iván Clemente, who since the beginning of October has been denouncing the disappearance of 59 minors on the island.

In a past interview with Metro during a demonstration on Capitol Hill, Clemente said he was asking to be heard. “It is necessary a collaborative, interagency government and that the country moves to investigate the 59 children who do not appear in Puerto Rico,” he said. 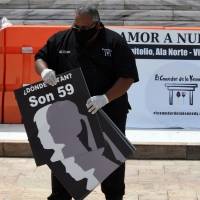 They will vaccinate against COVID-19 in Caguas, Cayey and Gurabo