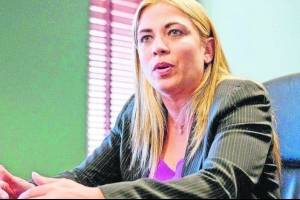 The director of the Highway Authority, Rosana Aguilar, resigned today, Monday, her position in the agency, informed the governor-elect Pedro Pierluisi Urrutia.

The engineer had been re-nominated to the post during the Pierluisi administration, but she also withdrew from the process.

“I received the resignation of Eng. Rosana Aguilar from her position and her reappointment as director of the Highway Authority. I thank her for the service provided to Puerto Rico,” Pierluisi Urrutia said in a post on her Twitter account.

I received the resignation of Eng. Rosana Aguilar from her position and her renomination as director of the Highway Authority. I appreciate the service provided to Puerto Rico. (1/2)

“Together with the designated DTOP secretary, Ing. Eileen Vélez, I will be identifying and appointing a person in the next few days,” he said.

During the transition hearings, Aguilar was strongly questioned by the president of the Transition Committee, Ramón Luis Rivera, for his management and performance in the agency.

However, it was renamed anyway.

Board agrees that the governor, mayors and Legislature identify $ 44 million for Equalization Fund

Charges filed against man for escalation of residence in Ponce