Members of the equestrian industry argue about the profits made by video game machines. 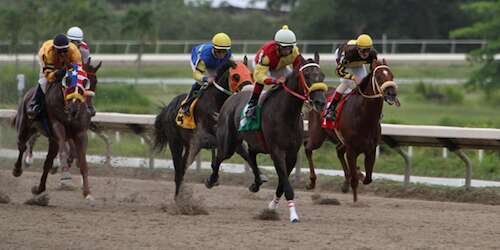 Only yesterday did Camarero Racecourse open its doors to the public after more than 90 days closed due to the COVID-19 pandemic.

However, this week, the Sports and Recreation Commission of the House of Representatives held a public hearing to "carry out a comprehensive study on politics public policy regarding the application of recreation and sport as constitutive elements of health, well-being, enjoyment and quality of life, and for other related purposes. "

The truth is that the horse riding industry maintains a struggle for the revenue left by slot machines, an operation that has been vital to make the operation of the racetrack cost effective.

María C. Mari, director of Special Projects at Hipódromo Ca Marero assured that in 2019 $ 44 million were generated from the operation of these machines and not more than $ 500 million as expressed by some members of the industry.

A source from NotiCel, knowledgeable of the industry, explained that 93 cents each dollar is returned to the players; which establishes that only seven cents are profit. That is where the $ 44 million comes from.

Mari, for her part, said that of those $ 44 million, the direct operational expenses of the system, inspection expenses, government licenses are paid, and then the Camarero Racetrack received an approximate of $ 7 million , Scientific Games the same amount, equestrian agents $ 13.5, and horse owners $ 6.6 million.

Mari added that the running costs of the racetrack are substantial to the point that the electric energy bill can be around $ 150 thousand a month.

"The Hippodrome Camarero is willing to show their numbers. However, this is a personal agenda for some members of the industry to seek more money when we are trying to get out of the economic impact that the pandemic left. Only today (yesterday) can we begin to receive audiences at the racecourse. More than 40 people who work in the video game area had to be laid off, "said the also vice-president of the racetrack.

For their part, the members of the Puerto Rico Horse Reform Committee, denounced in public hearing on Tuesday that "during In May, the Executive Director of the Gaming Commission circulated an email in which he extended an invitation to horse owners, to attend a meeting where Arturo García, Luis Hidalgo and Marcos Rodríguez Ema would participate, who they represent the interests of Scientific Games Corporation as lobbyists. "

This meeting would discuss the start of horse racing after the break decreed by Executive Order 2020-023.

" We do not know the motivation that Maymo Azize had to convene said meeting with lobbyist of SGC (Scientific Games Corporation) in a government facility and for this reason we request a deep investigation to understand that my sma violates various parameters established in Executive Order 2019-031, which in addition to creating the registry of lobbyists before the Government of Puerto Rico establishes the Total Transparency Code for Head of Agencies of the Executive Branch, which governs the behavior of officials in their relationship to their lobbyists, "alleged the Puerto Rico Equestrian Reform Committee.

Maymo Azize told NotiCel that she sent an email inviting 11 people from the industry and that the lawyers for Scientific Games Corporation went to the meeting because Hipódromo Camarero said it was important that the operator of the video game machines be represented.

Maymo Azize assured that at that meeting no lobbying efforts were made and no legislation was discussed. He also said that all sectors were invited but some decided not to attend, including the members of the Puerto Rico Equestrian Reform Committee.