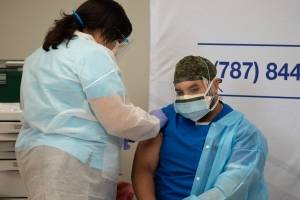 Today it is 21 days since the vaccines against COVID-19 began to be applied in Puerto Rico to health professionals. Of these, three have had allergic reactions after the dose was applied, as revealed by the specialized media Medicine and Public Health (MSP).

In an interview with the president of the Puerto Rican Association of Allergy Physicians, Rafael Zaragoza, he revealed to MSP that one of the three vaccinated was a nurse who had no history of allergies, while the other two did.

According to Zaragoza, these allergic reactions occurred 10 minutes after the vaccine was administered. Two of the allergy sufferers had a rash and itchy skin, and the other a bronchospasm.

“All three have presented an association of tachycardia and two with a decrease in pressure, which may be the beginning of what would be anaphylaxis,” the doctor told MSP.

These people received immediate medical attention and had no major consequences.

Zaragoza explained that these people should not be given the second dose of the vaccine as they could have a more severe reaction. According to him, they would have to look for options in the next vaccines.

OPINION: Of the LUMATICS, God take us confessed

They find confined dead in jail in Ponce